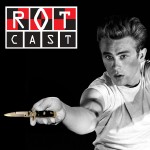 This will be part of the “Rebel Rebel episode 12″ of the Rotcast podcast.

I was a rebel only once…by default. It was Richmond, Kentucky…Model High School. I Google-ed the school website out of curiosity and the students now call themselves the “Patriots”. I’m happy to say mine was a less politically correct time. When I went to Model, the older students enjoyed rekindling the spirit of the losing South, possibly because there was no danger of bullets or bayonets reaching them from across time and making them regret that choice. Kentucky was a border state during the Civil War. But when I went to Model High School we were definitely “Rebels”.

The real Model High School rebels were the juniors and seniors. They were wild, and free. We were younger, impressionable, and hardly rebellious. We merely watched in awe.

I was settling into life in Kentucky. I had been through several traumatic events when my eye was caught by an older women. She was in 8th and I was in 7th grade. Thankfully, I don’t remember the awkwardness, but I can remember one very scary date I made with the beautiful Mary Sue. I’m going to remember it backwards.

First I arrived home shaken. I believe my mom remembers this as well. I must have presented quite a picture. Before I made it home, I had sprinted through a graveyard whistling. Quite a cliché that, but there was in fact a graveyard between the Eastern Kentucky University campus auditorium and my direct path home. It wouldn’t have made any sense to walk around.

On some other night it wouldn’t have been so eerie. I was on foot and alone after my date was picked up. The college students headed towards their campus dorms in the opposite direction. No one was heading in my direction. I was too young to drive so I waited with my date Mary outside the auditorium. Her family eventually came and picked her up. I felt a little better emerging from the theater alive. I had been expending half my energies trying to hide any signs of fear, while sitting with Mary. It was Halloween and I was afraid of the film.

The movie we had just seen was The House that Screamed. A poorly dubbed Spanish horror AKA: La residencia. I never enjoyed horror films but what was most unnerving about the experience was that the audience was made mostly of screaming college girls. They were having a terrific time screaming at every opportunity. I now realize they were trying to be funny due to the title of the film. Well it was too much audience participation for me and it had the effect of an extra cinematic sensation, like a William Castle picture. He was the impresario who installed buzzers under patron’s theater seats to provoke an additional adrenalin rush at key moments.

It this film the big reveal at the end is a mother has an insane son who builds a “perfect woman” out of body parts taken from various boarding school girls, whom he has murdered and butchered, and assembled into a horrific mess. Yuck! No one suspects the boy, because he is young and small. The movie lays some ground work for the boys psychotic behavior. Earlier in the film you see the mother repeatedly telling her son that the girls in her care (and that he finds attractive) are NO good. And the mother is a little too clingy. So in the end, the lunatic basically implicates his mother in his crimes. She drove him to it.

I found the film disturbing for its themes and dramatic presentation. My mission was a romantic one, The slaughter happening on screen was a distraction. But we were very young rebels. There was not much more to be expected from that date besides hanging out with college kids.–Rotcast

I have just ordered the DVD of La Residencia. I think enough time has passed now.