I am beginning to understand that it is the way The Big Red Podcast reviews TV that is irritating, not their views. Here is a recent comment I made on their forum.

You are infuriating! You weave the positive comments in so thoroughly with the rhythmic stream of BS—I guess that’s entertainment.

The key to the Fringe pilot is the set up of a dance between mad scientists. All else is secondary. But of that secondary material you found:

You didn’t get anything wrong you just made TV conventions seem like mistakes. It is a pilot. It is going to introduce characters. It is going to give them motivations. It is going to develop settings. You seem to ignore that the medium is fast. Would you want the pilot to explain the reasons why the Evil Dynamics Incorporated character has that incredibly weird office space? That would really be fascinating TV. Her choice of decorator, how she found them in the yellowpages.

Deeps made a spot-on comment when he said the young female actress did a lot with expression. Yes. That was amazing. She is cautiously in love. She wants to be apart of a team that doesn’t trust her. She is reluctant to use the power of her office. She is willing to bend her personal code for love…I could go on and on. It isn’t that they didn’t give her character much to do. They gave her face way too much to do, and the actress handled the job and still made it restrained and real. Even when the action is ridiculous, the rest of her performance sells it.

Why would there be chemistry between the young lead characters? She is insanely committed to someone else. By the end of the pilot she should be in shock. The mad scientist’s son starts out as her unwilling instrument. He is wrapped up in daddy issues.

It might be a stronger criticism to mention that the show ends like a TV pilot. Everyone decides to stay together and work with a cow in the corner. I believe the ending was quite badly done. Seams indeed, the sewing machine falls off the table.

I do value The Big Red Podcast’s opinion. They said True Blood was boring and I believe them. I was a fan of Six Feet Under for a few seasons. True Blood is a show by the same creator, but I have heard the man out promoting True Blood and I don’t know, maybe he said everything he had to in the earlier series. My good wife wanted me to add to my Fringe review that she noticed the actor who played Keen Eddie was part of the pilot cast.

Unfortunately, in the opening episode of Fringe, Mark mostly plays dead. He is flat on his back looking like a man-shape gelatin a good part of the time. When he is up and about, he is very good. In the last moments of the episode, he makes an exit with a bit of an anti-climatic cliffhanger.

I’m not sure that he will be a regular on the show. I imagine you could google that if you were interested in knowing.

A Rotwang* Moment—Fringe the TV Pilot 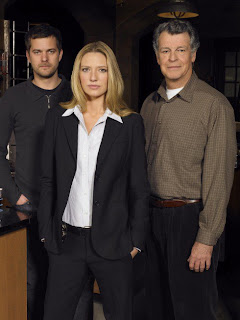 Our FBI heroine is sitting in one of the most improbable corporate offices ever! We see white walls with canted geometric bracing forming the corners. The room is the size of an airplane hanger, and completely bare except for a single desk and two chairs. The desk is formed of several huge white cubes balanced on their points with a sheet of glass on top. A women of about 50, dressed in black, is coolly explaining her long and loyal relationship with her employer to the FBI agent. Her employer we know is one of a two-man team that long ago was tasked with developing “fringe” science into applications. This scientist she says saved her life when she contracted cancer. As she explains, she removes the covering for her right arm and proceeds casually around the front of her desk. Her arm is a very sophisticated mechanical device that moves too fluidly to be anything available to present day science. This is creepy. It is to paraphrase Chandler like finding a tarantula on a wedding cake, meeting this character (this villainess) sitting at the center of a pure white office in full sunlight.

This scene occurs mid-way through the pilot for the new Fringe tv show, and is truly a Rotwang moment. The show was created by J.J. Abrams, who is very busy and popular I hear. I am unfamiliar with his other projects except through reputation and reviews.

I have read only one review for the Fringe pilot, and I strongly disagreed with it. The review repeatedly said that the show was written poorly. Examples of writing deficiencies sited were; the ideas are not new; the effects were not that special, and that some of the plotting to move characters around to meet one another was unlikely and didn’t ring true. These judgments are ridiculous.

Nothing is new, of course, when looked at piece by piece. The removing of the arm I mentioned, happened in two different Schwarzenegger Sci-Fi movies. And the premise of Fringe sounds very much like the Xfiles. But the writing is good. The dialog is very believable. The plotting of the pilot is going to serve to introduce new characters and can be forgiven a few economies. The special effects shouldn’t be too outrageous. This technology isn’t suppose to look like magic, merely a little better than what we know.

I really like the setup. Two scientists once worked together. One ends up in a mental hospital drooling on himself (the good one) the other creates a company that may have already taken over the world (the evil one). Samson and Goliath.

The 50 year-old women in black, our tarantula, reappeared at the end of the pilot obviously in-charge. I predict she is not working for the evil scientist, but is the evil scientist. Either that or she is the lab assistant who became injured back in the day. The guilt over that accident drove the good scientist into the mental hospital. In fact both parts of my prediction could be true. I may watch this show again.

* For the uninformed — Rotwang was the evil scientist in the Fritz Lang silent film Metropolis (1927). He brings to life an evil robot/replica of Maria. He learned to do this trick by experiments that cost him his own right arm.

This is a wine my beautiful sister Elizabeth gave me from her wine shop. I really enjoyed it. I would definitely drink it again. The first taste was very raspberry. Stronger than I had ever tasted. Much of the flavor was in the aroma. Subsequent sips didn’t hold the same raspberry sensation. It might have gone into a blackcurrant, I don’t really know how that tastes. I drank the wine within a week, replacing the cork from the bottle between meals. It remained a great tasting wine to the last glass. It is a Spanish wine and it wasn’t expensive ($8.50). I will definitely be writing more about this wine.