Movie Review: The Company of Wolves 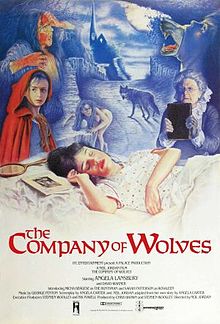 The Company of Wolves (1984) Directed by Neil Jordan, based on the short story by Angela Carter.

At the beginning of the film The Company of Wolves we get the lay of the land. The starting point is at an abandoned well in the woods. A dolls head lays in the overgrowth next to the well. The camera follows a German shepherd dog as it runs across the landscape that will become a dream space we will soon occupy for the rest of the movie. The woods may not be recognizable, but the the dog disturbs many animals that we will see again later: A crow, A frog, and a pair of rats. The big rats are shown running off a country road as a Volvo station wagon drives passed. And while this is not the most memorable scene, I had to ask why. That is not where you would expect to see rats. The rats appear only briefly, but it must have been that behind the scenes a rat wrangler was brought in to stage that shot. Why waste the time? Could it be that people find rats revolting and that would kick-start the movie with an emotion of horror? This movie and the short story it is based on are known to be symbolic. There is a layer of Freudian symbolism, but there may be a personal symbolism added by the movie makers. Why two rats? Why not one or three? This movie is about sexual desire and sex, male and female. I think there are two rats because there are two sexes and that the writer and director, one male and one female are showing themselves. Maybe as a joke. As though they are declaring themselves as the two rats behind this story.

There’s very little in the film world of The Company of Wolves that doesn’t occur within the dreams of Rosaleen. Rosaleen is the Little Red Riding-hood heroine of the story. She is dreaming from the first time we see her till the very end of the film. If we take the movie at face value, then we must believe that the bedroom Rosaleen is sleeping in is a real place. The dog that has guided us through the landscape that will become the dream world leads us past the real gate where the Volvo has turned and driven up to the house where Rosaleen sleeps. We see Rosaleen’s sister Alice and her parents, the dog continues through the house up the stairs to the attic where Rosaleen sleeps. Alice is dressed as if for church. She is all in white, a crucifix necklace is visible at her throat. She is charged with waking up Rosaleen. The location of Rosaleen’s room is odd. She is locked away in the attic with boxes and portraits stored leaning against the hall that leads to her door.

The camera pans around inside her room. There are modern posters and art pinned to the walls. There are also ancient looking toys like you would find in the attic. These will reappear in her dream. A white toy Rolls Royce sits on her dresser. Later a large white Rolls Royce of the same design carries the Devil around Rosaleen’s dreamland. Rosaleen dressed all in white, acts as the devil’s chauffeur. In this guise she sees herself as blonde. The mirror or opposite of herself.

The contents of Rosaleen’s bedroom could be a Rosetta stone of symbols. But it would take too much time to track all of the items in the room and guess if they have meaning. For example a photo of the actor Cary Grant can be briefly seen in the very last shots of the film. Grant would hardly seem a figure of importance to a young girl, more likely he would have meaning for the director, or maybe the photo means nothing.

After the camera takes in Rosaleen’s bedroom, it centers upon Rosaleen the dreamer. Beside her head on her pillow are two items. One is a magazine called, My Weekly. The magazine cover shows a fearful woman and the cover story is titled The Shattered Dream. Beside this is a hand mirror. Rosaleen is wearing lipstick and make up. The implication is she was reading something racy, and stopped to put on makeup and then fell asleep.

We hear Rosaleen’s sister Alice complain through the locked bedroom door that Rosaleen has stolen her lipstick again. The sister seems very antagonistic to Rosaleen and taunts her through the door. Rosaleen remains asleep. She soon inserts Alice into her dream. It is a nightmare for Alice where she is attacked by Rosaleen’s antique toys.

Alice explores the nightmare to find a familiar dollhouse. One that was barely visible in the corner of Rosaleen’s room. She removes the side of a dollhouse and occupying the tiny bedroom, and poking out of the canopied doll bed is a rat. This must be a symbol for Rosaleen the betrayer who has place Alice into this scary dream.

As Alice tries to make sense of the nightmare, she curiously opens the base of a grandfather clock. Our pair of rats from the opening shot reappear. They jump out of the base of the clock. The clock hands are running forward very fast. If these rats are the writer and director of the movie in disguise, I would say their location in the dream is telling us linear time within the film is not to be trusted.

At the end of this dream segment Alice is consumed by wolves. In the waking world she is never seen again. Rosaleen smiles with eyes still closed. A good case could be made that Rosaleen has murdered her sister. We know very little about either girl—or what makes them individuals. They could be interchangeable except one is older. Pains are taken to make Alice a mirror image of Rosaleen. Alice represents a path Rosaleen does not take. A dead end. Alice is buried in the new dream. Her mother removes the crucifix from her dead older daughter’s corpse and hangs it around Rosaleen’s neck. The new dream is set back in time a horse and cart world. Where a folk village is built around the old wellhead we saw in the very opening of the movie. Rosaleen is now Red Riding Hood. [Keep to the path].

The actor casted as Rosaleen is amazing. I looked Sarah Peterson up and she stopped acting shortly after this movie. Pity. Angela Lansbury is perfect as granny. There is a homage to the twisted kiss Lansbury gave (Lawrence Harvey) her son in the Manchurian Candidate in The Company of Wolves. We see a sinister close up of Lansbury, her eyeglasses glared out by the firelight as she announces “bedtime” like it is a death sentence. There’s an awkward pause after she asks for a kiss from her granddaughter. Maybe granny is a witch or a predator. Rosaleen leans into Lansbury who is seated. She cranes her neck for the kiss. Lansbury raises her hand to Rosaleen’s face, but instead of the lip lock Lansbury forced onto Harvey, she merely guides Sarah Paterson to her cheek. Ahh… Granny’s a good old gal after all.

The music score is mysterious. The use of synthesizer in places seems appropriately gothic as music and sound effect. I have a problem with the werewolf transformations. It isn’t that they don’t look real. They should look strange and unreal. However, they mix old-school makeup transformations together with a clever animatronic wolf emerging whole out of a man’s mouth. Side by side the two types of transformation takes my suspension of disbelief out of the film and I start to think about how the trick of simulating the rapid growth of body hair is stop-frame animation.

I’m not a fan of blood, but blood as a visual in this movie is completely necessary. Its application, however is only sometimes successful. When the Huntsman dabs blood into his month from a dripping animal pelt, it’s beastly and nasty. Red blood dripping on the snowy white ground is poetic. Steven Rae ripping his own bloody face off, belongs in a different movie entirely.