I liked the idea that this was show number two and that we were making a pun on the letter B. This is the only show where the teaser from the previous show actually announces real content appearing in the following show. Most of the time the teaser sets up the theme, but does not announce real future content.

Next we turn activist and present some discussion of colony collapse. Colony collapse is the shorthand for the problem of dying bees. Bees are key pollinators of the world’s food crops. This environmental problem stayed with us because it was a mystery and it could be just the tip of a frightening iceberg. There are new revelations surrounding the problem of colony collapse. The Daily Mail of London (David Derbyshire, January 21, 2011) reports that a study by the US Department of Agriculture’s Bee Research Laboratory, (…didn’t know we had one of those) lays blame for colony collapse with a type of pesticide called a neo-nicotinoid.

Two reasons why the bees dying might have remained a mystery until now: first, traces of the pesticides in the bodies of bees are nearly undetectable. And second, the Agriculture Department’s study took so long to get out to the public. It hasn’t been published. Possibly the US Agriculture Department is prevented by law from releasing information that might affect the profits of chemical corporation. I wouldn’t be surprised. If you read this and you buy or sell these pesticides, Please don’t!  Boycott the German company Bayer until they cease the manufacture of the pesticides. They may not be the only company who makes them, but they seem to have a large foothold in Europe. I don’t believe we can overreact in this case. The Rotcast podcast does not usually care to make political statements, but we did in this show.

This is followed by our first interview with a dead person in a feature we titled, with little inspiration, Dead Air. We intended the feature to be a passing parity of the NPR show Fresh Air.  Fresh Air often reruns a show when someone they once interviewed dies. And we thought our Dead Air might be an interesting way to talk about the afterlife in an entertaining manner. We intended to focus on dead artists or creative people exclusively. To work with the “bee” theme, we choose Sylvia Plath, as our initial interviewee.  Plath wrote a series of very intriguing poems using bee imagery.

We stopped the Dead Air feature in episode 9 but, we reprised it once more in episode 13. These segments took enormous time and energy and they never seemed finished enough.–Rotwang

Intro music: Flight of the Bumblebees

Audio Clip: “There was a bee…” from EverAfter (1998 starring Drew Barrymore)

The JuicyTruth Wine Review: Bug Juice, a Muscato di Asti by Rinaldi our rating 89 out of 100 points.

Music for the JuicyTruth is: “Then She Stopped” by Dizzy Gillespie

Music out: “Honeybee” by Much Love 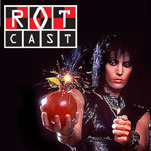 The first episode starts strong with love for rock-goddess Joan Jett. Her powerful crunching version of “Cherry Bomb” opens the show. This show predated the bio-pic of the Runaways by a few months. I guess besides the song being on topic, its underlying message, which is about a sexy new bad girl (or podcast) ready to explode into your awareness, seemed like a grabber. This also foreshadows the embarrassing nature of this first show, which is as much about sex as anything else. Mix that with the interspersed stories about my dating and race relations and you have a perfect storm of mortifying digital evidence recorded and archived. Ouch.

I also decided at the beginning of Rotcast that we would not use x-rated words or language. So there is all this implied, or creepy, talk around sexually charged situations. Is there a clamoring from the Internet for this type of restraint? I doubt it. I didn’t mean for the trappings of the show to bait-and-switch listeners. It is just my nature: I enjoy adult ideas, but I dislike “shock” language.

We used way too much found audio in this first set of ten shows. But we were learning to edit. Not just to fix flubs, but to simulate believable dialog and timing where there was none before. I’d like to say we have achieved mastery over this but we are trending away from pieced together interviews. I like doing them, but they take along time to prepare, often they don’t work, and we started to realize, they might not add to the reputation of the celebrities. We tended to only pick people who made a positive impression on us, so we weren’t going out of the way to belittle them. –Rotwang